In this tutorial, we are going to show you how to adjust a video clip’s playback speed in Filmora9 and create slow and fast motion videos or add freeze frames to the footage you’re editing.

Changing a Video’s Speed and Duration in Filmora9

The rate at which camera captures frames determines how slow or fast they are going to be when you play them. As you increase the number of frames a camera takes each second, the motion in the video becomes both slower and smoother.

Most digital cameras can record videos 24fps, but if you want to record slow-motion videos, you’ll have to change the frame rate to 120fps or 240fps.

Filmora9 offers easy ways to increase or decrease a video’s playback speed during the post-production process and allows you to speed up or slow down each video clip you add to the timeline.

After placing a video clip whose playback speed you would like to change on the Filmora9’s timeline, you should right-click on it and select the Speed and Duration option from the menu. Optionally, you can use the CTRL+R keyboard shortcut to bring up the Custom Speed window.

Once the Custom Speed window appears on the screen you should drag the Speed slider to the right if you would like to make the motion in a video clip faster, or move the slider to the left to create a slow-motion video.

The Speed value you assign to your video is going to be displayed in the box next to Speed slider. This value is set to 1.000 by default, but you can also insert a custom speed value that matches the demands of your project into the box next to the slider.

The duration of a video is displayed in the following format:

In order to extend or shorten a video’s duration you just have to insert new hours, minutes, seconds and frames values that are larger or smaller than the video’s original duration. Filmora9 will automatically adjust the video’s playback speed and match it to the new duration value you added.

Clicking on the Reverse Speed checkbox will enable you to play a video in reverse, while the Ripple Edit option allows you to automatically change the position of the clips next to the video clip whose playback speed you changed.

When done, you should click on the OK button to confirm the changes and Filmora9 will display the new playback speed in a blue bar at the top of a video clip. Clicking on the blue bar will enable you to use Speed options to make a video’s playback faster or slower.

In addition, you can drag the edges of this blue bar to the left or to the right if you want to alter a clip’s speed and duration.

The Speed icon that is located on the Filmora9’s toolbar grants you instant access to the Custom Speed window and it allows you to speed up or slow down a video automatically.

Simply click on the icon in the toolbar that looks like a speed meter and choose one of the available options in the Slow or Fast submenus. Moreover, you can play a video in reverse, return its playback speed to normal or make a freezeframe by simply selecting one of these options from the Speed drop-down menu.

A freeze frame can be any frame from a video clip you’d like to turn into a still image. Position the playhead at the exact spot in a video clip where you want to add a freeze frame, then right-click on the clip and select the Freeze Frame option.

The Alt+F keyboard shortcut enables you to make freeze frames with a push of a button and Filmora9 will automatically add a freeze frame to a video clip you’re editing. 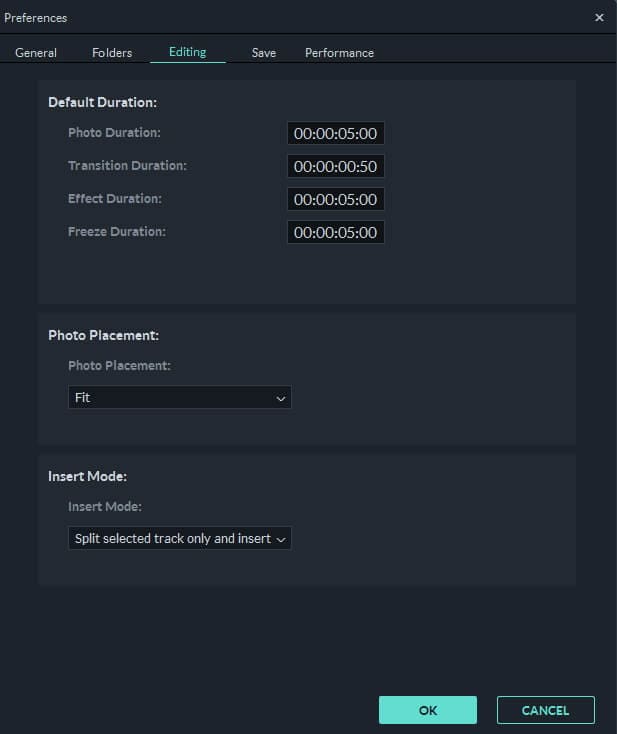 If you would like to change the default freeze duration you should head over to the File menu and select the Preferences option. You should then click on the Edit tab and insert the new default Freeze Duration into the box next to this option.

After a freeze frame is added to a video clip, the Freeze Frame bar is going to be displayed over it. To change the duration of a freeze frame you just have to drag one of the bar’s edges in an inward or outward direction.

Ep. 00 Ready to Make a Video with Filmora9? Let's Get Started! 5min

Ep. 34 How to Convert Portrait Videos to Landscape